When someone says “3D avatar,” what’s the first thing that comes to your mind? We at Perpetio immediately think of something old, something new, something borrowed, and - most importantly - something blue. Of course, we’re talking about James Cameron’s epic sci-fi film – Avatar. And here’s why:

But we’re here today to talk about different 3D avatars - the ones people use to represent themselves online.

From the earliest days of our journey into the virtual world, humans fell in love with the idea of an alter ego – a character that would act on our behalf in the digital realm. Not only did game developers give us those characters, but they also were the ones to coin the term “avatar.”

A concept from Hindu mythology, the word “avatar” quickly made its way into the daily life of gamers, first appearing in Origin Systems’ Ultima IV: Quest of the Avatar in 1985. Since then, we’ve been using the term to refer to our profile pictures in social media, in forums, and on other websites as well. But, still, the avatars worth talking about came from video gaming.

The avatars of today

For your convenience, we’ve divided today’s avatars into industry-based categories.

If you’ve ever played GTA V online, you’ve witnessed one of the most customizable character experiences in open-world games. There are a million choices you can make: from gender to heritage (you can finally choose your parents!), skin tone and complexion, hairstyle, body type, facial features (shape of the nose, cheekbones, eye color), and finally - apparel.

Approximately 4,000 clothing items are available for you to express your inner fashionista and give your avatar a one-of-a-kind look. And while stealing vehicles is your standard MO throughout the game, you’ll strangely have to shell out for clothes. This time, it’s only the game’s currency. But hold that thought.

What you get is a realistic 3D personality, along with almost boundless creative freedom.

Rockstar Games aren’t the only ones privy to how much players love to create their avatars. In massively multiplayer online role-playing games (MMORPG), customizing characters is an ancient art form, with Pearl Abyss being one of the companies to bring it to your smartphone. Its bestselling game - Black Desert Mobile - offers precise character customization, so your bulging tricep and your hairdresser’s triumph are the last things online enemies will see. If you don’t believe us, check out the Android or iOS app.

Can you think of another online activity where people gather in large numbers, engage in clashes, and need cool avatars? You guessed it...

First, there was just text. Then smiley faces turned into a full range of emojis. And then Apple rolled out Animoji in 2017. Here’s how it worked: the iPhone’s camera would track your face and then superimpose your facial expression onto your choice of emoji. Initially created for iMessage, the recorded clips could be used on any social network or messenger.

As if that wasn’t enough, the tech giant took it up a level with Memoji in 2018. The result was a 3D floating head you could fine-tune with a wide selection of options and then use as a sticker or send in a video.

Bitstrips then created Bitmoji (currently owned by Snapchat). Now you can make an entire virtual person that looks and dresses the way you want - and expresses whatever emotion you choose. Even better - your personalized Bitmoji avatars are AR-capable, and the company offers SDKs (Software Development Kits) to integrate your character into games.

Following their success, Facebook launched its own highly customizable avatars – first internationally and later in the US. You can use the cartoon-like characters in Messenger, natively, as well on Facebook gaming profiles.

On forums and in chat rooms

Both of these ancient forms of online communication have lost their influence significantly. Well, maybe except for giants like Reddit or Stackoverflow. So if you see anyone who still uses forums and chat rooms, tell them we’re looking for them. And we want to see their avatars.

The list goes on - it seems like everyone plays the avatar game at some point. So, why do people love it, and can this tech offer something more than high endorphin levels?

Why do people enjoy creating avatars?

There are many forces at play, but here’s what we think: as humans, we need a sense of belonging and safety, whether off- or online. Avatars - our virtual proxies - are a fantastic solution to that. They give us just enough exposure while shielding us from the online world’s negativity, and yet they allow for our creativity’s unlimited expression.

We can resemble our authentic selves or look completely different from the original; we can choose the outfits we actually wear or experiment with new styles. In the end, the decisions that shape this online identity are ours only.

Also, it’s fun and free, for that matter. But if you think it can’t generate revenue - you’re wrong.

Your first name is Will, last name - Smith. The 24 hours in your day are split between shooting Bright 2, marketing your Just Water brand, promoting yourself on social media, investing in startups, and spending time with family.

What if someone told you there was a way to add a few extra hours to your busy schedule - without creating a catastrophic time paradox? Someone who looks like you could step in and take over some of your work in the digital dimension - with your permission, of course. What if this copy of you didn’t get tired or depressed and would be available around the world 24/7? What if this partner of yours could sign deals with brands and not require any compensation from you for the hard, selfless work?

That is the exact idea behind Genies - a tech startup based in Venice, CA, whose product delivers the above solutions. As you might have guessed, Genies produces 3D avatars - and its first batch consists of celebrities. The company has already partnered with Gucci and is looking actively to cooperate with other manufacturers and brands to bring new virtual goods to their platform.

Here’s how their business model works:

Sounds like an ambitious plan, doesn’t it? Well, the tech is here, and so is the demand - so soon competition will be fierce. The time to get into this business is now. Millennials (the decision-makers of today), as well as Gen Z (the young paying customers of tomorrow), love innovation and won’t keep waiting forever. So go and seize this opportunity because, as the quote from another Avatar tell us,

“Only once every hundred years can a Firebender experience this kind of power.”

If you’re interested in building an avatar creation app, be sure to drop us a line. At Perpetio, we know a thing or two about mobile app development, excellent mobile UX, popular SDKs, and other innovations. And we’d love to build the next avatar creation app for you. 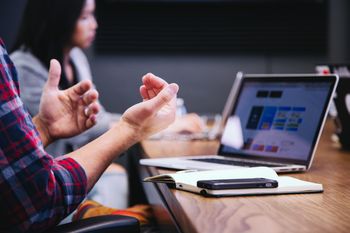