The process of mobile app development includes many choices to be made: the feature set, UI/UX design preferences, platforms, monetization model, and so on. Of course, one of the most important decisions is the app development approach.

Native development exclusively for either iOS or Android is not the only option anymore as it was just a few years ago. With the appearance of cross-platform frameworks, many business owners are now opting for the flexibility of getting an app for both iOS and Android platforms in the shortest terms. In fact, one-third of mobile developers are now creating cross-platform solutions.

Choosing a cross-platform development sounds like a win-win for the companies as they can get two well-performing apps for a lower budget. But does the cross-platform approach work for any app type, and when is it better to go with the native approach instead? Let’s discuss.

What are native and cross-platform apps: two approaches towards mobile app development

Before we start listing the pros and cons of each development approach, let’s begin with their definitions. Native and cross-platform development are the two main ways to create a mobile app (hybrid development is the third approach, but it is less popular today).

Native development means a mobile app is built specifically for a particular platform (either iOS or Android) and can run only on it. No matter whether it’s a smartphone, tablet, or smart TV — a native Android app will work on all Android devices but not Apple and vice versa. Native apps are written with platform-specific programming languages. For example, to make an iOS app, a developer uses the Swift or Objective-C languages, Android — Kotlin or Java.

Cross-platform development allows writing a single codebase that can be shared and reused across different platforms. It means that a developer only has to build one application that will run on both Android and iOS devices. Frameworks for writing cross-platform apps include Flutter, React Native, and Xamarin.

Looking at the difference between these two mobile app development approaches, you might say, “The cross-platform way seems like a win-win; I can get two apps developed simultaneously while minimizing my budget. The decision is easy!” You are not wrong; cross-platform development is indeed a great option. But does it suit any app type, and when is it better to opt for the native approach? Let’s discuss.

Native app development remains the most popular way to create a mobile solution. No wonder; because native programming languages are backed up by Google or Apple, native development means a reliable, well-structured process with extensive documentation and clear guidelines.

Native apps are sure to give the best performance possible and an unparalleled look & feel to the app. What are the advantages of the native app development approach?

Pros of the native app development

Native apps perfectly align with the OS they are written for, meaning that there are no bottlenecks and lags when it comes to the app’s performance. When going for a native application, you can be sure that your users will get a seamless experience and won’t stumble across any obstacles.

More complex native applications with loads of data won’t be slow. Native solutions are usually smaller in size and require less operating from your device, meaning that the load time will be lower than cross-platform applications.

Plus, native applications are perfectly optimized to various OS versions and screen sizes, as well as use dedicated APIs to interact with the device more effectively. As a result, users can enjoy complex features in the app with no problems.

As native apps are written to suit a particular OS, they can easily get access to hardware functionality through a wide range of dedicated APIs, such as camera, GPS, push notifications, and so on.

Both Apple and Google have detailed design guidelines focused on intuitiveness, clearness, and user-friendliness. By following these, designers create solutions that are easy to navigate and visually pleasant. The interfaces of iOS and Android differ significantly, so using customized UI components and pre-set libraries for a specific platform makes the task smoother for a developer and, consequently, ensures a good result.

Native apps feature security protocols created specifically for a particular platform taking into account its vulnerabilities. It is easier to integrate dedicated APIs and libraries to provide a higher security level as well as test for possible data leaks and frauds.

Earlier access to all the newest technologies and features

Google and Apple constantly improve their respective programming languages and add new tools. That’s why native iOS and Android developers always have the first opportunity to check out some new functionality and work with a cutting-edge tech stack. Those building cross-platform solutions usually need to wait for their framework to catch up with the updates.

It’s not surprising at all that deploying your brand new application to Apple Store or Play Market is less complicated if the application is native to iOS or Android. Often, such apps get certification faster as they automatically follow the platform's design guidelines and generally have high performance.

Stability in maintenance and scaling

If you are planning to scale up and regularly add new features to your application, it makes sense to go with native development. Both iOS and Android are mature and well-documented platforms making their maintenance an easy and predictable task. Developers can make fast adjustments and update the app when needed, following the established protocols.

Get a top-performing native application from Perpetio’s iOS and Android developers.

Cons of the native app development

Of course, no approach can be perfect, and there is a little fly in the ointment when it comes to native development.

As compared with cross-platform development, the native approach comes to be much more costly and takes a longer time. Because you are getting two applications developed, even simultaneously, the final budget will be at least twice as high as it would be with a cross-platform approach. There is no issue, though, if you only need an app for one platform.

When it comes to native app development, your team will be using the programming languages, frameworks, and APIs based on the platform.

As for Android, Kotlin and Java are the coding languages. Android Studio and IntelliJ IDEA are the commonly used tools for Android app development.

When to opt for native apps

Taking into account all the pros & cons, when should one go for native development instead of a cross-platform approach?

Native app development is right up your street if:

Now, let’s move on to the main competitor of the native development — the cross-platform approach. It is a great option for building MVPs and validating one’s idea ASAP without going over the top. At the same time, cross-platform apps often have near-native performance and looks; one might not even tell it’s a cross-platform solution. What are some other advantages of cross-platform frameworks?

Pros of the cross-platform development

The first advantage of cross-platform development is right in front of us — with the time and cost you would typically spend on one native app, you can get two cross-platform ones! Or, more precisely, you get one app that can run on both iOS and Android devices.

Because code sharing is the main mechanism of any cross-platform framework, you might reuse this code even for web-based solutions. Cross-platform gives you more flexibility in choosing platforms than ever.

Cross-platform development is the quickest way to present your solution to the audience on both mobile platforms.

Because the developers and testers only need to take care of one code, quality assurance and later maintenance become less time-consuming as compared with two native applications.

Our Flutter team is open to new projects!

Cons of the cross-platform development

Of course, a rather fresh approach comes with certain drawbacks.

Because cross-platform development means that the same code is reused for both iOS and Android, this approach requires a high level of abstraction. Some parts of the code might need additional integration work from the developer.

Despite cross-platform applications having native-like performance, it might not be the best choice for an application full of data to load and process, like 3D games. Otherwise, a fair portion of lagging might be unavoidable. Simpler cross-platform apps cannot be told apart from the native ones.

Let’s remember that all the cross-platform frameworks were developed not so long ago, so it’s normal that they might present certain limitations when it comes to the app’s functionality. Additionally, because a cross-platform app works as an imitation of the native ones, there is a wait time for the framework to implement the updates.

There is quite a selection of cross-platform mobile app development frameworks. Flutter remains the most popular one, with 42% of developers choosing it. The runner-up is React Native framework, with 38% of software engineers opting for it.

When to go for cross-platform development

If you find these descriptions to match what you are looking for, then cross-platform is exactly what you need.

Native vs hybrid apps: which mobile app development approach to choose for your business flexibility

If your priority is a top performance, an app that can load large amounts of data, and impeccable user experience, a native application is what you need. Keep in mind that it might cost you a penny.

If you need to reach the market in the shortest terms, need to be more flexible with the development process, are working on presenting an MVP, or are short on a budget, cross-platform platform development is the way to go.
Don’t worry if you are somewhere in between and can’t make a decision as for now — you can get consulting from a development team you are collaborating with; their business and tech experts for sure can assess your project and recommend a suitable approach. At least, that’s how we get it done at Perpetio.

Contact us today to get a free project estimation!

How to Build an Android Wellness App with the Ktor Framework. Part II: Android 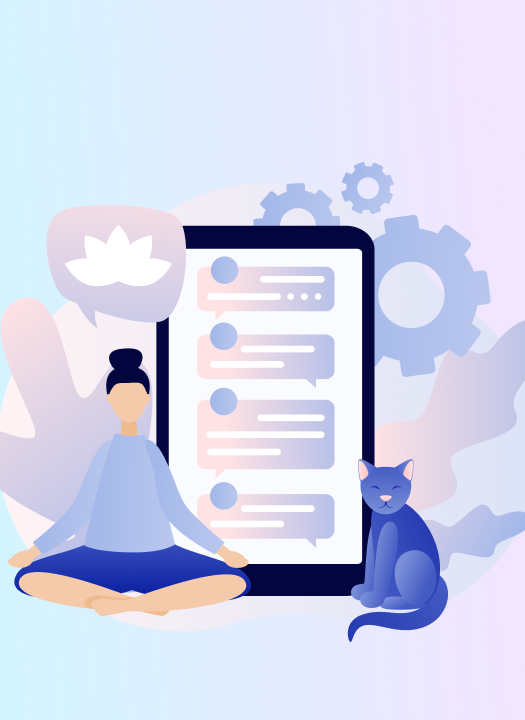 How to Build an Android Wellness App with the Ktor Framework. Part I: Backend